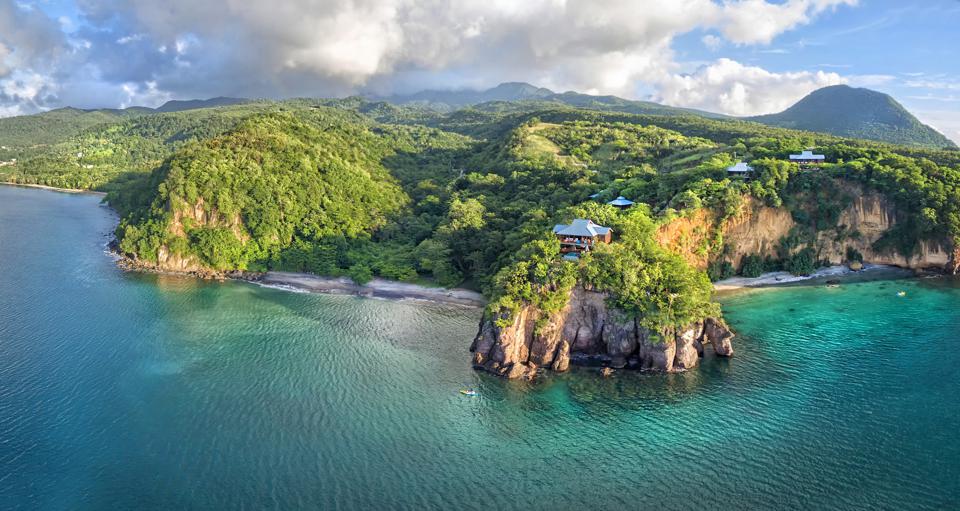 Why Rich Americans Are Fleeing To The Caribbean This Winter

Rich Europeans and Americans are flocking to the Caribbean, but not for the usual winter sun. More and more wealthy individuals are moving for longer periods than usual.

Citizenship advisers, government agencies and real estate developers say they have seen a rapid increase in business over the past few months. Even luxury hotels say they are booking in guests for long-term stays.

The increase in American arrivals has been most stark, they say. Mohammed Asaria, whose Range Developments is working on a new Six Senses resort, says U.S. citizens are coming to “hide it out.

“You’ve got the election coming. That’s number one. You’ve had Covid and certain places in the U.S. have been challenged through that, and more working remotely.”

U.S. inquiries for residential villas at Secret Bay in Dominica have jumped 66%. “It’s the first time the U.S. has gone through a period like this and it’s not just the Covid-19 situation,” says Gregor Nassief, its proprietor. “It is the fear of what an extreme outcome on the left or right may look like after the presidential election.”

SECRET BAY
Others are keen to escape with new-found working from home freedoms. “Digital nomad is not a new thing,” says Petra Roach, head of Global Markets for Visit Barbados. “Before we didn’t really think about it.”

But then in July Barbados launched a new 12 month “Welcome Stamp” designed to attract remote workers to the country. Since its launch there have been around 1,100 applications, 42% of which are from the U.S. British and Canadians are the next largest nationalities to apply.

Hotels Run Out Of Rooms

Barbados’s new temporary residents are checking into Airbnbs while real estate agents rush to find rental properties. Hotels are even offering long stays. Both the Hilton and Marriott in Barbados have announced month-long packages.

But the wealthier clients want something more than just a hotel room. Many want actual citizenship of the islands where they are staying. Barbados does not offer this but Grenada, Dominica and other Caribbean nations do.

“Citizenship By Investment,” or CBI as it is known, first started in St Kitts and Nevis in 1984. Traditionally it attracts Chinese and Middle Easterners who want a passport with more travel freedoms.

But in the past few months it too has seen an increase in U.S. inquiries. “We have seen an uptick in applications from the U.S. for people who want an alternative passport,” says Les Khan, chief executive of the St Kitts and Nevis Citizenship by Investment Unit.

Normally the two-island nation hands out passports to investors who never visit their country. This year is different: Its new citizens actually want to come to the islands. Some want to stay.

GETTY
This is putting a strain on the supply of government approved real estate projects that qualify for citizenship. A minimum of $200,000 must be spent on real estate to access citizenship, but currently only approved developments count and most of these are linked to hotels.

“We’re looking at alternatives outside of our hotels,” says Khan. “Individuals are looking for opportunities outside of those hotels and get access to our citizenship through private homes. It’s something that we’re exploring.”

This is largely due to a change of lifestyle, he says: “Individuals who are from the U.S. apply for St Kitts passport are doing so to want to come and change their lifestyles and live on the island.”

RANGE DEVELOPMENTS
Grenada is also having to come up with more room. Range Developments Six Senses resort will include a branded residential component in Grenada. “People want a second or third home in a place where they’re not going to be affected by any of this should a second or third wave come,” says Asaria.

Real estate is not the only path to Caribbean citizenship. St Kitts and Nevis, Dominica and Grenada allow a contribution to a sovereign fund as an cheaper route. Citizenship advisers tout Caribbean passports for their visa-free travel freedoms, or, in Nassief’s words, “A useful insurance policy” should things at home go awry.

However, more and more duel national Americans are renouncing their U.S. citizenship. A total of 5,816 Americans gave up their citizenship in the first half of this year, a 1,210% jump on the previous six months and more than double 2019’s total says Bambridge Accountants.

“The huge increase in U.S. expats renouncing from our experience is that the current pandemic has allowed individuals the time to review their ties to the U.S. and decide that the current political climate and annual US tax reporting is just too much to bear,” says Alistair Bambridge, partner at Bambridge Accountants New York.

Tax reporting plays a large part in this: The U.S. is unique in requiring its citizens to pay tax wherever they are domiciled. Most of those renouncing are likely to have moved abroad several years previously. However, some now armed with a Caribbean passport and the power to work from wherever they want may have decided to take the leap. Turks & Caicos is a tremendously beautiful destination with white sandy beaches meeting turquoise blue waters that stretch for as far as the eye can see.

There’s No Place Like Home: How New Tech Is Reinventing the Smart House

Around the world, we are seeing a desire for an elevated experience in the home that new technology affords, and one that is also mindful of the environment and the footprint left behind.

Why Rich Americans Are Fleeing To The Caribbean This Winter

Rich Europeans and Americans are flocking to the Caribbean, but not for the usual winter sun. More and more wealthy individuals are moving for longer periods than usual.

Around the world, we are seeing a desire for an elevated experience in the home that new technology affords, and one that is also mindful of the environment and the footprint left behind.